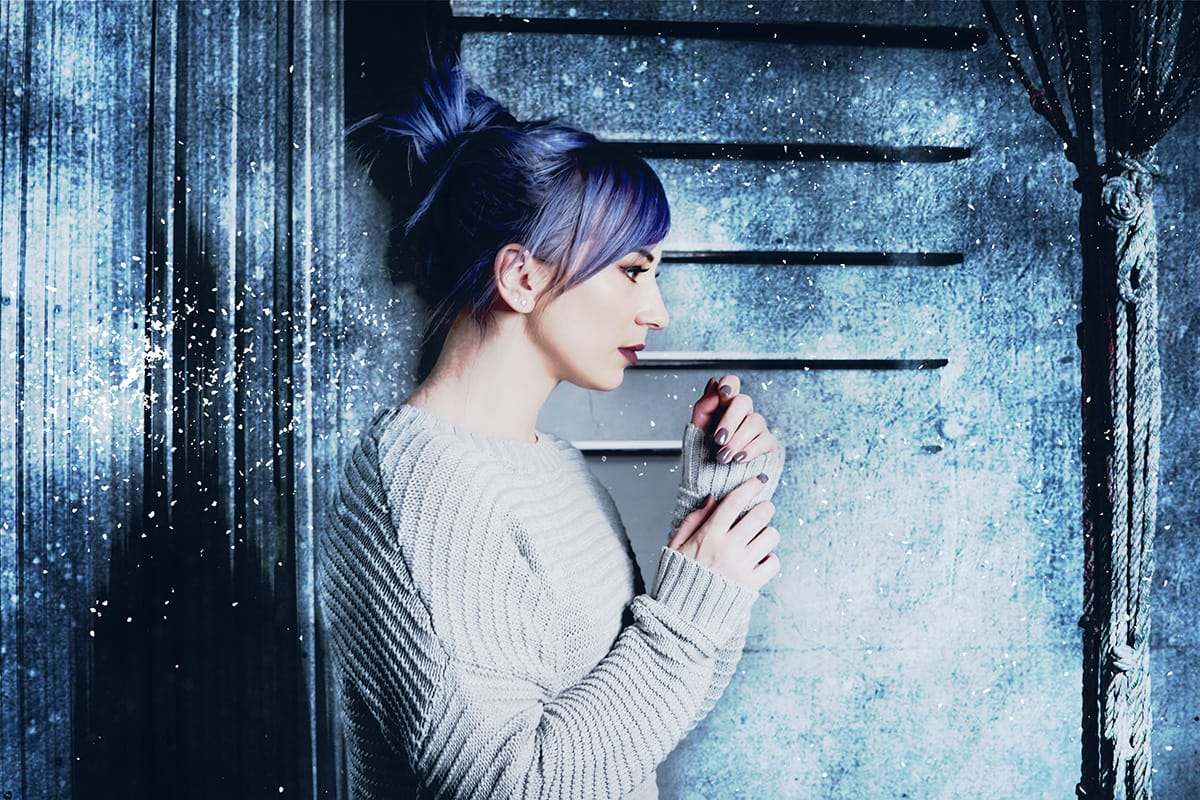 Music is a powerful vehicle that can change lives, and few wield that power with more passion and skill than Jen Ledger. After a decade as the drummer for multi-platinum rockers Skillet, the talented Brit has toured the world and is now ready to unleash her own musical vision with her debut EP, LEDGER.

“The thing that makes me most passionate about doing music is to be someone who is actually singing about hope,” she says with a toss of her sapphire tresses. “There are things about life that matter so much more than what social media portrays. I want to be a voice of hope and life – to bring people up with my music rather than be a voice that tears them down.”

Show MoreThe youngest of four children, Ledger grew up in Coventry, England and took up the drums at 13 because she wanted to impress her older brothers. Two years later, little sis was a top female finalist in a national competition in the U.K. Soon after she was awarded a scholarship at a music school in the U.S. At 16, she left home for what she thought would just be a 10-month program, but there were bigger things in store than she could have ever imagined.

A friend told Ledger that Skillet was looking for a new drummer and encouraged her to audition. The shy 17-year-old initially brushed off the suggestion, but her friend coaxed her into meeting Skillet frontman, John Cooper and his wife Korey, and she showed them her skills. “The idea of performing felt huge and terrifying, and I just didn’t feel like I was any good at the drums,” she confesses. “I was just so sure that everyone else around me was better.”

Well the Coopers didn’t think so and called her back for what she thought was just a second audition. She was surprised to find it wasn’t another audition. She had gotten the gig. “The main thing I’ve learned from touring with Skillet is just how impactful music is. I have traveled the world from Russia to Japan to Australia and I have seen music impact people,” says Ledger, who joined the band a few days after turning 18, and played her first sold out arena show. “I’ve heard people all over the world say, ‘You’ve saved my life,’ and it’s an honor to be able to be a part of anything that influential. My own life has been transformed by the reality of God and His grace and goodness, and I want my music to reflect the truth and hope of Jesus. I’ve seen music have power and bring light; to save people and to help people get over addiction or empower people that want to give up. I’ve seen music go above and beyond what you could ever imagine.”

Armed with that sense of purpose, Ledger embarks on her solo career as a woman on a mission. Working with producers Seth Mosley and Korey Cooper, Ledger has crafted a stellar debut that showcases her emotion-laden vocals and insightful songwriting. “Korey produced a song called ‘Warrior’ that features John Cooper,” Ledger shares. “This is a song about being a warrior. It’s empowering. It says, ‘I’m not going to let whatever the world screams at me hold me back.’ We will be free and we will be brave.”

Ledger penned the poignant ballad “Ruins” with Korey six years ago. “It was one of the first songs we wrote together, and she really challenged me to get a lot deeper with my lyrics and just be really vulnerable in it,” Ledger says. “To this day it is one of my favorite songs I’ve ever written.”

“Not Dead Yet” is a song Ledger wrote in response to her battle with anxiety. “It was actually affecting me in my life and my choices,” she admits. “I wanted to hold back. I was writing and working towards a solo career, but my anxiety made me feel like I shouldn’t even try. It was quite crippling honestly. I had a night where I was just panicking, and I felt really afraid and I’m like, ‘What if this is something I battle for the rest of my life?’ Korey looked at me and said, ‘You never let fear rob you of your own life. You fight until the day that you die.’ It was one of the most impactful conversations that I’ve had. I won’t give up. Maybe I’m not the best. Maybe I’m not the strongest. Maybe there are a million people who can do this better than me. Maybe everything I’m scared of is true, but it’s not going to stop me from going for it. It’s not going to stop me from living my life. I’ll never give up fighting it. I won’t let it take me out. Anxiety and depression in young people now is taking over the world more than ever and I’m hoping that this song will be as powerful to them as it has been to me.”

As the first female artist for Hear It Loud, the label imprint the Coopers launched with manager Zach Kelm in partnership with Atlantic Records, Ledger feels a responsibility to carry the artistic torch ignited during her years with Skillet, yet to create her own distinctive sound that will shine a light on a hurting world. “I want people to listen to my music and be encouraged to be brave, to step out and not to let the world tell them who they should be,” Ledger says. “Maybe you’re not the best or the strongest. You are who you are, and you’ve got to be brave with the life that you’ve got. Do everything you can with it and don’t be held back by stupid things like fear that just want to rob you. Just get over it. Be brave. Be courageous.”

Those are wise words from the girl who left home in her teens, traveled halfway around the world to pursue a dream, and is seeing it come true more every day.